Each year, Scuba Diving around Koh Lipe just gets better and better for us, with 2016 being the best year yet for the huge diversity of Marine Life we have been lucky enough to see!

With the Thai National Park taking a much harder line on illegal fishing in the Tarutao National Park and it’s surrounding waters, we definitely noticed an incline in the variety of critters we can now call ‘regulars’ on our beautiful reefs.

Below, you can find a summary of our top 5 spots of this year so far, and should you be considering a visit to us in the future, look forward to the possibility of bumping into a few of them underwater! 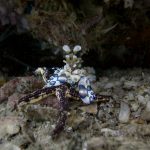 SPOTTED BY: Super Jo, Matteo, Matthias.
WHERE: Koh Sarang, Far Islands
WHEN: April 2016
ABOUT: The Indian Ocean Harlequin Shrimp have a white body with large blue/purple spots, and the males are slightly smaller than the female, its maximum size tending to be only about 2 inches. On its head, the shrimp have petal-like sensory antennules, used to smell out their prey, and it’s front claws are oversized and paddle-like (looking kind of like giant oven mitts, if you ask me).

Typically found in coral reef waters of 23-28 degrees Celsius, the Harlequin Shrimp can move around frequently due to changing conditions in it’s surroundings.

Mostly found in mated pairs, the Harlequin Shrimp work together to both reproduce, and hunt for their food. Their meal of choice would be starfish, but should this be unavailable, they have been known to feast on some urchin species also! Due to their choice of diet, making them slightly toxic, the Harlequin Shrimp are considered unattractive prey for most predators. 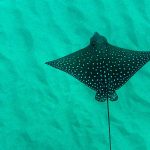 SPOTTED BY: Amanda, Matteo
WHERE: Pattaya Corner, Koh Lipe / Honeycomb Reef, Koh Adang
WHEN: February / April 2016
ABOUT: This black or bluish large ray with a lot of small white spots, can reach a maximum length of 5 metres, and maximum wing span of 3 metres. It can be found throughout the tropical waters of The Indian Ocean as it migrates seasonally with the summertime warming of the waters. It is often seen singly or in pairs, but rarely large groups have been reported (Our Instructor Amanda was lucky enough to spot 20 Eagle Rays swimming by at Pattaya Corner in February of this year!).

The eagle ray is also known to breach the surface to clean itself, and there are rare accounts of leaping eagle rays having accidentally landed into boats! In April this year, we saw this on 2 occasions, once just off Koh Talang, and once right next to Koh Kra when coming in from our afternoon dive.

White-spotted Eagle Rays are usually shy and difficult to get close to underwater; you have to be quick to spot them as they gracefully swim by, and off into the blue. 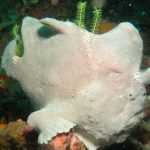 SPOTTED BY: Max, Amanda
WHERE: Stonehenge, Koh Talang / Pattaya Corner, Koh Lipe / Honeycomb Reef, Koh Adang
WHEN: February 2016 / April 2016
ABOUT: Frogfish range in size from almost invisible, to giants reaching the size of a football, with the males being typically smaller than the females. They are some of the funniest looking critters you can spot and also the best equipped camouflage-wise!! This makes them great hunters, and rare fodder for predators. They are ambush predators par excellence, using their camouflage to hide from predators, but mostly to lie in wait for unwary victims, which they snatch out of the water in the blink of an eye.

They are can be slightly cannibalistic in nature, with the males have to take extra special care during the mating ritual, as the females have be known to eat the males after fertilisation – gruesome!

Frogfish are extremely rare, and hard to spot. We haven’t encountered more than one in The Tarutao National Park for many years until 2016, when we have spotted over 14 different Frogfish, so if you are a fan, now is the time to come and pay a visit. 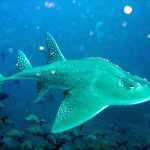 SPOTTED BY: Yves
WHERE: Adang Long Beach, Koh Adang / Koh Yang East Bay, Koh Yang
WHEN: March 2016
ABOUT: The Bowmouth Guitarfish has an unusual body shape, intermediate between that of a shark and a ray, and is named for its long, pointed, bow-like snout. Their colour ranges from olive to sandy brown and they can reach a maximum length of 2 metres, with the males typically growing to a smaller size than the females. Although generally solitary, female Bowmouth Guitarfish may gather in large numbers in shallow waters when getting ready to give birth (this is where they have been spotted around Koh Lipe – in waters less than 5 metres deep, and in groups of 5 or more!)
The Bowmouth Guitarfish feeds on a variety of bottom-dwelling invertebrates, such as shrimp, crabs and worms, and also on small fish if they fancy it.

Guitarfish have been classified as Endangered Species by The Department of Marine and Coastal Resources of Thailand for the past 4 years, and hence this years sightings around the Tarutao National Park are extremely positive and lucky. We record all sightings we have with the DMCRTH, so that they can monitor population and threats, and so help to protect and encourage growth of the species. We hope to be seeing a lot more of these beautiful creatures in the years to come! 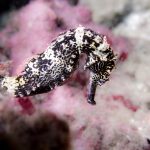 SPOTTED BY: Clare, Kris
WHERE: Koh Sarang, Far Islands / Stonehenge, Koh Talang / Seven Rocks
WHEN: January – June 2016
ABOUT: Named for its black and yellow striped tail, the tiger tail seahorse is an unusual-looking fish, with an upright posture, curved trunk, and grasping, prehensile tail. Unusually for a fish, seahorses lack scales, and the skin is stretched over a serious of bony plates, which appear as obvious rings around the trunk and tail. Seahorses are masters of camouflage, and are able to change colour or possibly even grow skin filaments over time to better blend in with their surroundings. The tiger tail seahorse can vary in colour from yellow to black or brown, often with mottled patterns on the body, and with fine white lines radiating from the eyes.

Seahorses are true romantics, and one of the rare species in the animal to mate for life. Unusually, when breeding, the male seahorses also carry the eggs until gestation, even though the female of course possesses them initially.
In 2004, all seahorse species were added to the Convention on International Trade in Endangered Species (CITES), so we consider our sightings here extremely exciting! Luckily for us, we see 5 or 6 different Seahorses per season, and all seem to stick around for a while, meaning they must like it here.

Many Other Amazing Sightings 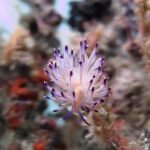 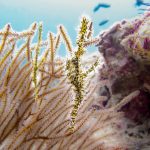 Despite the above being our overall TOP 5 sightings for this season, there were endless other exciting spots for our staff and customers throughout the year. With a huge variety of Macro Life in the Tarutao National Park, you should look out for, and expect to find, hundreds of different nudibranchs, rare shrimp, ornate ghost pipefish, blue buttons, sea angels, and many more. We also have rare sightings of larger pelagic dwellers such as manta rays, whale sharks and minke whales. Follow us on Facebook and Instagram for up to date sightings, and get in touch with us via email to check what the best time of year is for you to visit us and spot your favourite marine life. 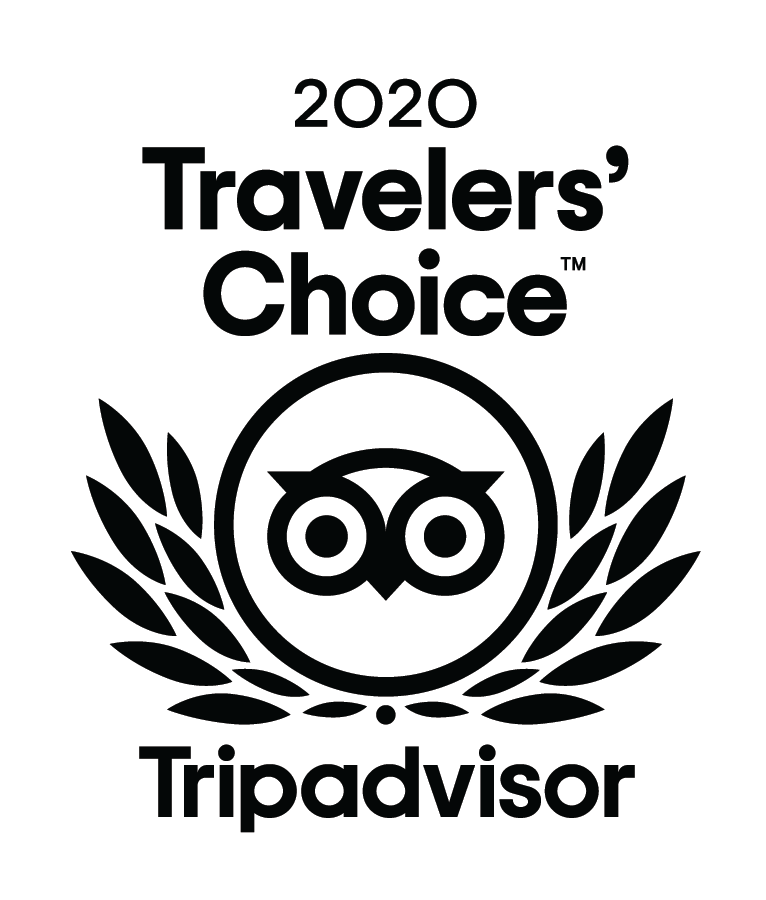 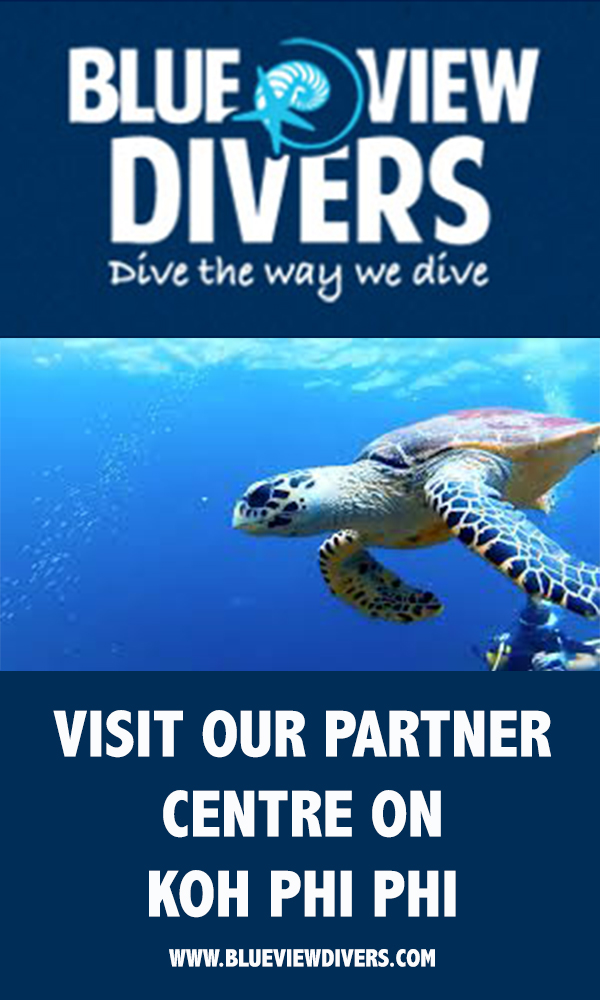 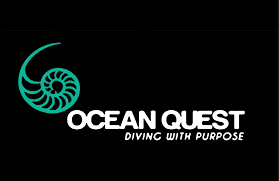 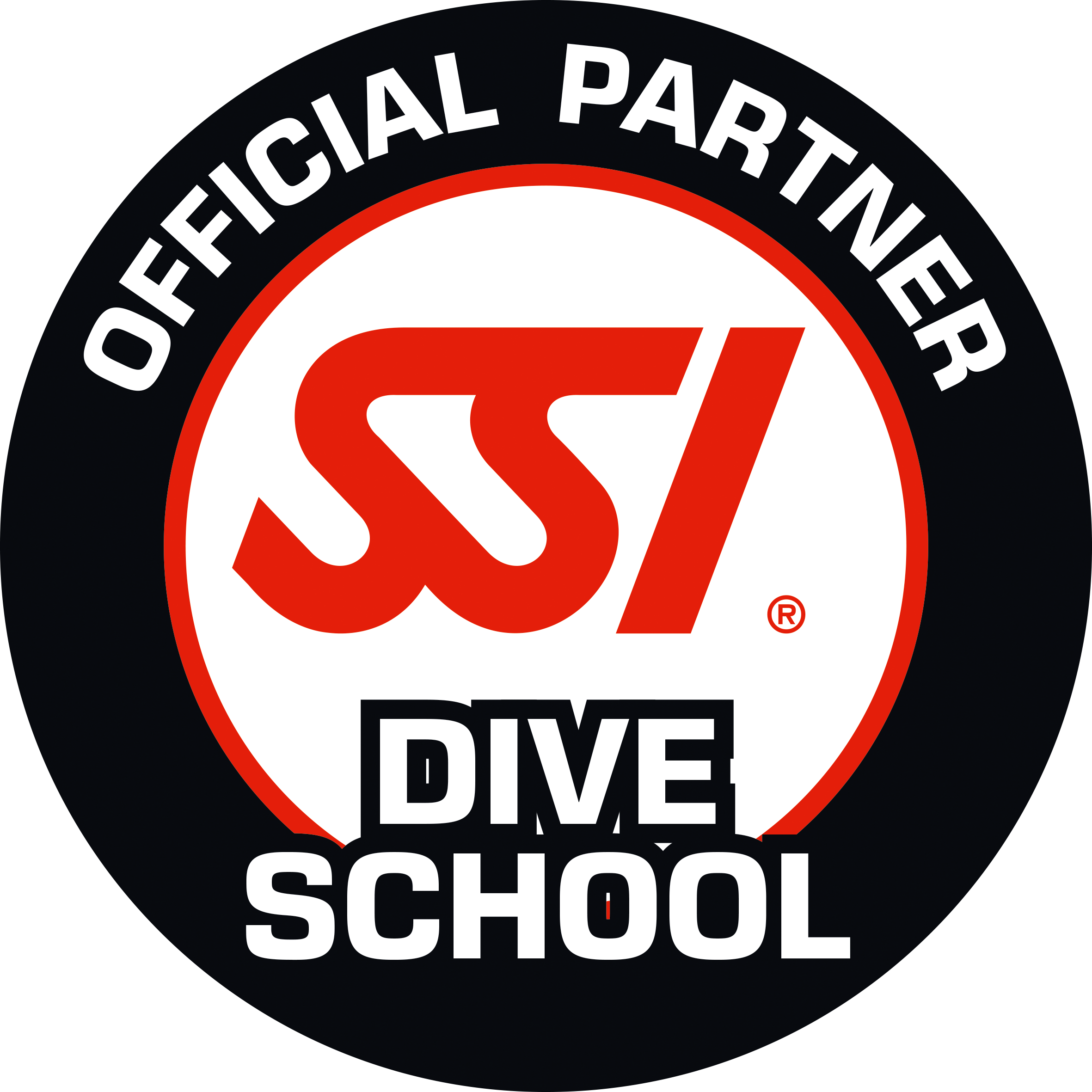